Surface as a task manager

Almost a year ago I've published an entry entitled "Reverse-engineering future into daily tasks", in which I've described a task management system that facilitates achieving long-term goals. Although I've stopped using the system in the middle of last year, I still believe in some of its main ideas:

One of the main building-blocks of the reverse-engineered daily task system are the intemporal goals I've called hypergoals. If nothing else, then this one idea stayed with me all the time since giving up using the method. Here's a quote from my entry a year before:

Hypergoals are not easy to describe. They're goals in the far future that are always present in your life, but never visible. They're always at the back of your mind, but they never directly manipulate your decisions.

After you define a few hypergoals in your life, they should assist you at making decisions. They shouldn't put any friction in your life, but guide you in darker times.

Although the previous method helped me motivate myself to do certain tasks, it was stressful and rigid in a sense (but this rigidness is why it worked so well in that period). Probably the problems I've started to recognize didn't come from the system itself, but from my change and attitude towards tasks.

Getting things done is not a priority anymore. Moving in a liner direction is not my goal anymore. While facilitating thinking and personal development is, which I believe is non-linear and intemporal (just like hypergoals).

Therefore I want to eliminate scheduled tasks, which is a hard task, as lists come with a particular linearity and therefore temporality too.

This is not the place and time to talk about Kinopio, instead try it out yourself. Briefly, it's a cute, but powerful mind-mapping tool, living in your browser (or between multiple browsers if you sign up, which is optional).

I've opened up a new "space" to start to plan out a system that I could use in my notebook as a task manager. I wanted to stick to the notebook, because I can always keep it in my pocket and it's a simple way to be synchronized everywhere, without giving away your data to some large entity. In the moment I've opened up the space, the idea struck me: why don't I use Kinopio to manage my tasks? It's dynamic, non-linear and automatically synced between my computers without giving the data to Google et al.

The decision was made: I have to design a system that works in Kinopio. Below you can read about it.

In order to avoid the word "list", I'll use the term "TODO network".

A network is built up of edges and nodes, in this case infinitely many edges can belong to a node and any node can be connected to any number of other nodes.

On the top of my Kinopio space lays a row of nodes, representing higher level goals or projects. Remember hypergoals? These are quite similar to those, maybe a bit better defined.

On the left side, forming a column, are a few nodes marking dates. There are tasks that need to be done until a certain date, so I simply connect the task to the given date. The dates are sorted top to bottom, from earliest to latest. On the top of the column is a special node: TODAY. This is a way to define what I want / have to finish today.

All other nodes represent tasks. Tasks can connect to any number of goals, dates or even to other tasks. Using different types of connections it's clear what has to be done to complete the tasks (ie: write entry about todo surface).

Here's an example todo surface. You can also explore it directly on Kinopio and even make a copy of it. 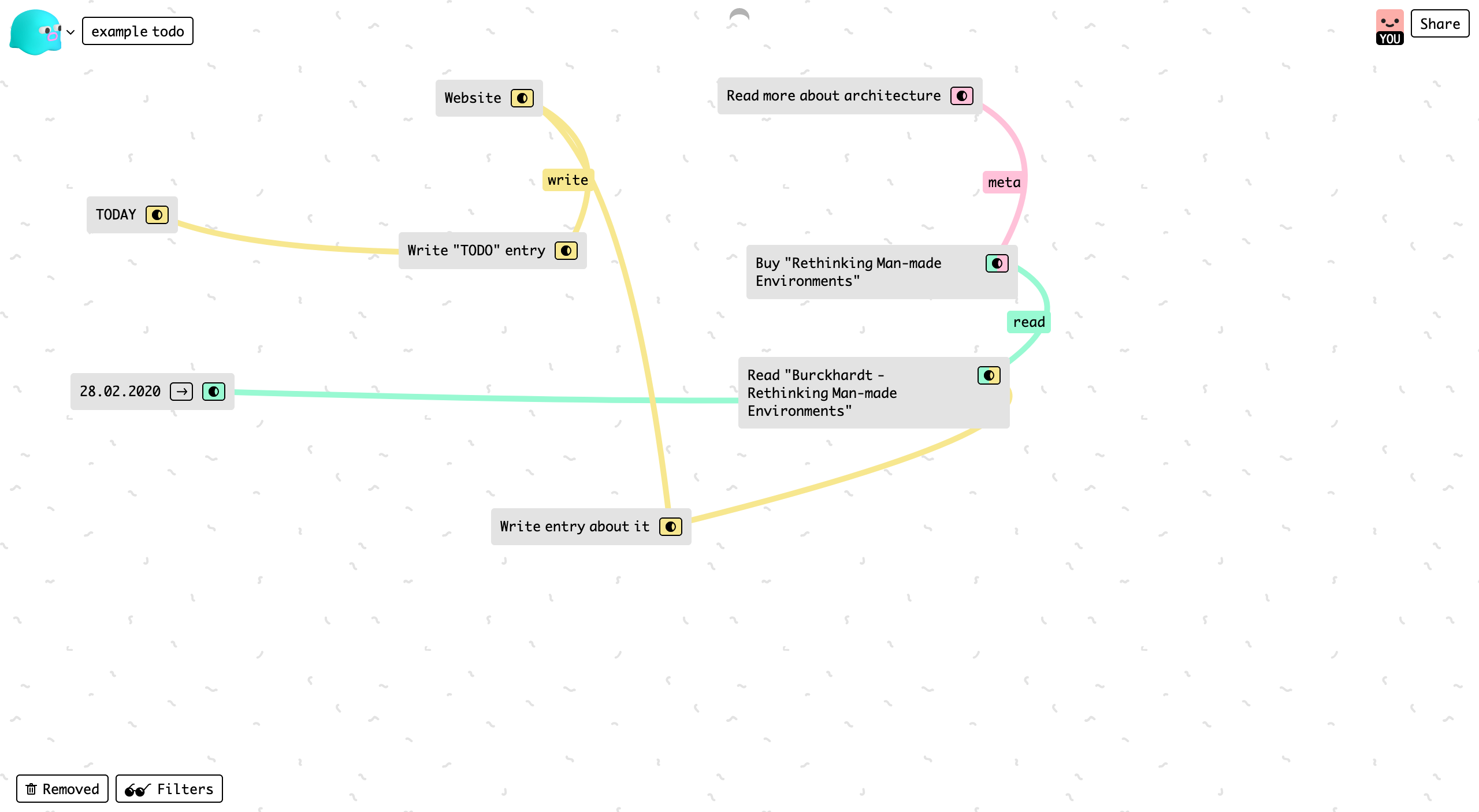 That would be it for now. Let me know what you think or check out how the system came together in this Kinopio space.