Are you the owner?

On a free and loosely definable space, like the internet, the whole system's based on ownership. Different locations are owned by countries, corporations and people, just like on the surface of the Earth (though it's much more challening to draw the boundaries of the former).

I have this vision about a utopian system where a piece of land has no owner ― it's free to use by anyone, but the permission is restricted to usage only. People are not allowed to expropriate the land ― that means no fence, no legal ownership. I know: this isn't a system that could be realized for many reasons (stealing, lowering soil quality, etc.), but it's a concept I like to think about. We could all work how much we want and get profit based on our effort (professions are metaphorically limited to agriculture).

We can also apply this to the context of the web.

What if no subspaces of the internet would be owned? What is a subspace on the internet, anyway? First of all, it must be something that can be seen (metaphorically) as a space ― it's in "READY state"1 and its emptiness is its functionality. It also has some metadata in order to help you access and specify it (geolocation, IDs, URLs, ...).

We can initiate many spaces in a context by using different perspectives. As the web is a gigantic network of computers, I would see these ― the computers ― as subspaces.

In the HTTP universe 1 computer mostly equals to 1 site as you can access it by the machine's IP address. This limits you in the number of sites you would like to publish: most hosting services don't sell cheap hosting plans for small and simple sites and it's also some time to setup them.

On the peer-to-peer web you can start a site anarchistically, without depending on domain name registrars and cloud storage services. There's no need to own a piece of web-land, you're free to have as many sites as you want without the need to pay for anything ― and you don't need another computer besides your personal one.

I see the peer-to-peer web similar to the utopia of not-owning.

The DatArchive API has a brilliant function called isOwner(). It's very simple: returns true if the visitor is the owner of the site and false otherwise.

This removes the need of authentication.

I've got interested in interfaces that use this powerful function. Most content management systems have an isolated panel / admin page, where through authentication you can get permission to edit the content. There's no need for this on the peer-to-peer web: the same interface ― under same dat:// URL ― can be used to read and to edit the content, without any action from the user. The interface can automatically react to a visitor and to its owner.

I've made two tools that use this concept: orkl and solo.

I wanted to build a peer-to-peer only blog (though, later I've included the http:// accessibility too). Orkl has a simple, text-focused blog interface. The index page shows all the published entries in a chronological order and that's all it can do. But when you want to start a blog, orkl is in ready state. No setup, no admin registration: just copy the site and you can start publishing.

Other than the few buttons that appear for the owner, it's the same interface for the visitor. 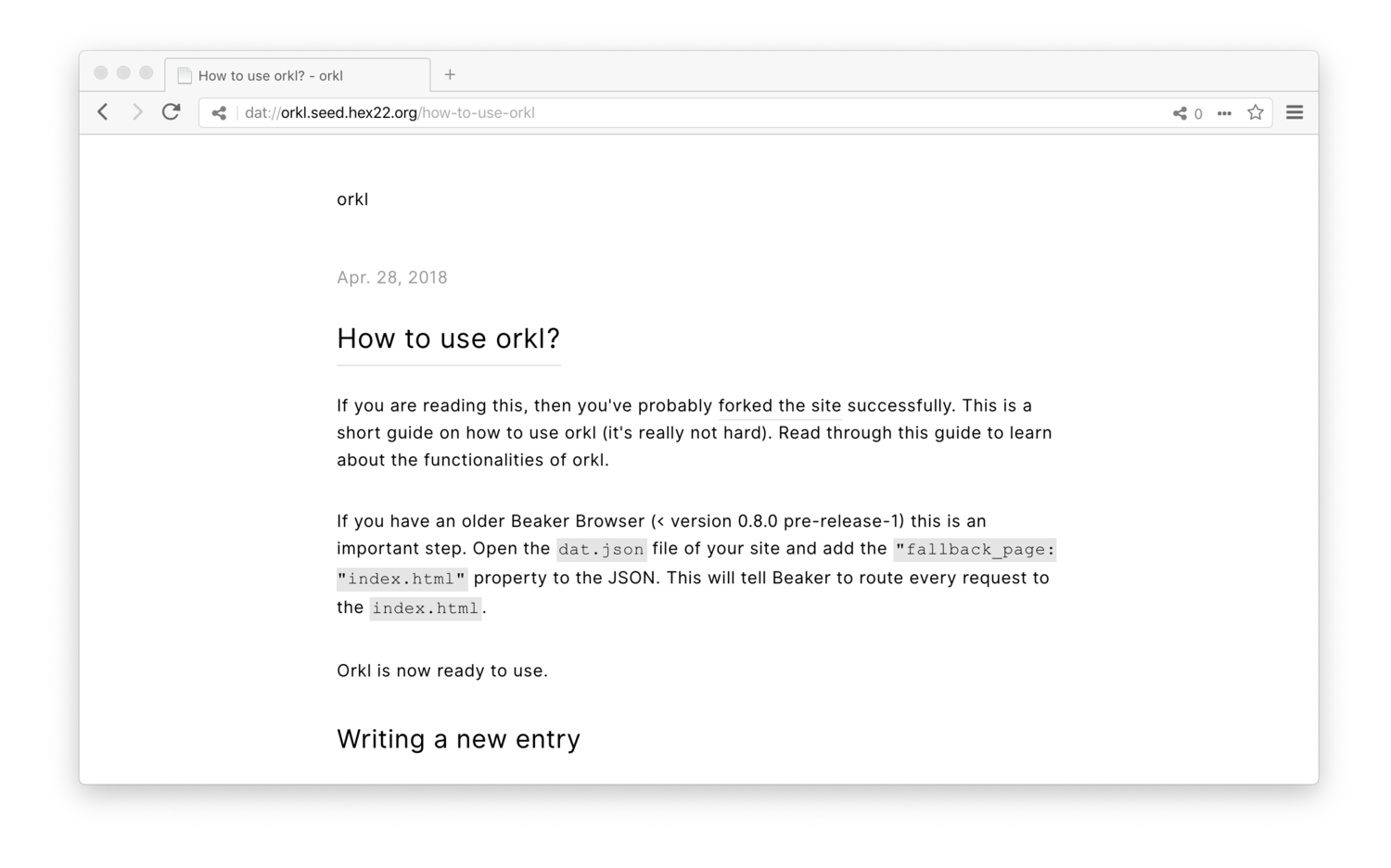 Solo is a publication tool for one-page pubications: the entries are not presented in a collective way, like on blogs, magazines. All the entries exist under different dat:// URLs. When the owner visits the site the editor appears, when it's just a visitor, the formatted version of the text renders.